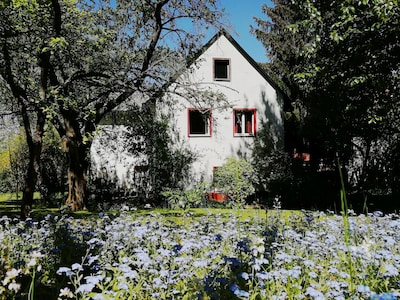 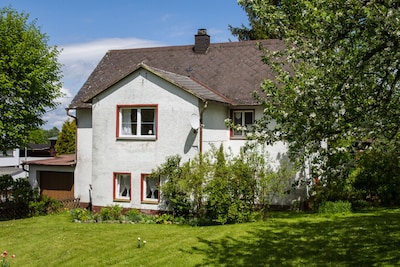 Unfortunately, our stay was very disappointing and we left a week earlier than planned. We had booked this house because of the closed garden so as to spend a relaxed holiday with our dogs (we do not own a garden ourselves so we were really looking forward to meals in the garden, lazy reads with the dogs around etc). The first day we spent only in the garden and did not go out at all. The same evening one of our dogs began to vomit foam, to walk uncertainly as if drunken, to scratch himself. He did not eat or drink and almost died during the night, we had to drip water in his mouth with bits of cotton. The next day one of our other dogs showed the same symptoms. We took them to the vet who said they showed signs of poisoning. As the owner said there was nothing poisonous in the garden but there was a lot of rotting fruit, the vet said it could come from that (rotting fruit ferments, apple pits contain cyanide). In addition, it turned out that the dogs (and we ourselves) were full of bites by the harvest mite. We had never heard of this insect before and were shocked by the strong allergic reaction. We tested in the garden with a white board and within less than a minute the board was crawling with them. As we had been nowhere else that first day, it was clear the dogs got it from the garden. They needed extensive treatment (four visits to the vet), it took five days for them to recover. We did not use the garden anymore. The house itself was clean, simply decorated but dark and cold (fourteen degrees C inside when it was twenty degrees outside), so our only option was to go outside the whole time. There is heating but it needs to be paid extra. We could not open the windows, as there was a wasp nest under the roof and they would fly in all the time, especially when we were eating. Additionally, the neighbours started to build something in their garden the day after we arrived and there was building noise from seven am every weekday. The owner had been very helpful when we arrived, giving us tips and closing a hole in the fence at our request, but due to a family tragedy did not respond when our dogs became ill and we told him about the problems with the garden. He did not offer to refund anything, even though we had to pay an extra train journey back and the very expensive bill at the vet. The area is beautiful for walks and there is a lot to see, so we were very disappointed not to be able to enjoy our holiday more.